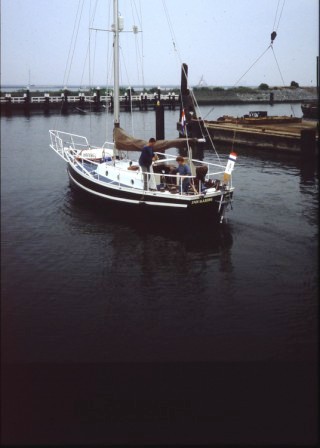 Jan Haring is leaving the small .

We had worked 5 years to reach this departing moment and we were ready for it.

And thus of course we were too busy to wave goodbye to the family as the question in our head was : What will the future bring?

Now  ( writing this in Nov. 2004), many miles,  islands, adventures and 20 years later, we know the answer to that question. And we have not a single regret of that departure.

One thing will tell you so as we are still living on board, be it now on Alishan.

But Boy, has cruising changed over those years we can say that we have a more than a few new toys and cruising styles.

Number 1 is of course the GPS. Do we love that little  gadget.and like so many boats, we have 2 on board!! 1 fixed and 1 handheld.

20 years ago we were using a handheld item too, called: The Sextant   (We still have it ,  somewhere in its box on board)  Finding your position wasnt just a push on the button: After taking a couple of  sun-sights a day, you had to do a lot of math ( not handy if you are seasick prone) only to get a guess-position .. And then there were the days that the sextant didnt have to come out of its box due to overcast..and so those days we were even less sure of our position. Pffff.

Now with GPSssss: Its every second  a fix.

Other additional ways of navigation we did have used, were: Follow that airplane, I think it will fly to the .. Or crossing the North Sea in thick fog: Okay, follow the noise of the ferries must be somewhere in that direction . Or; lets call that big freighter on the VHF and do a position check on himJ

Cruising around the Tuamotos in gave us once a surprise fright: We arrived safely after an overnight passage atthe wrong island. Due to the unknown strong currents we must have bypassed our goal during the night!  Wont happen these days with cheap and reliable GPS and radar. 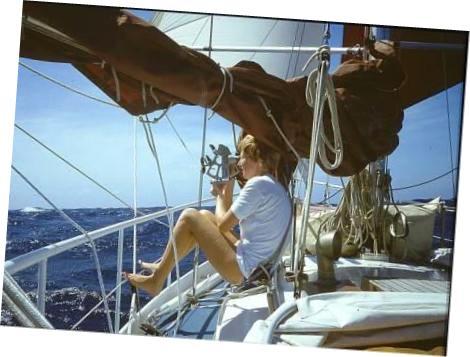 Marijke with  The Handheld mid ocean.  Keeping the camera and sextant horizontal isnt easy on a small yacht sailing downwind in the trade winds

Next is: reading left and right the HP reports from fellow cruisers who aresatellite phoning each other mid-ocean for weather reports, cooking recipes and what ever.

Where is the GPO with the General Delivery? That were our first words, once we arrived in a new port. And if ever we did make it to that post office and there were no letters waiting for us $&^%$##^..  .  Now of course its: Where is an internet café? Or, lets take out a local 1 day internet connection

Our cruising destinations were not seldom nailed down  because of those few GPO we planned to use, so yes we did loose some mail, as  we couldnt plan the weather;))

Now with internet everywhere and anywhere its so easy.

We too love it and use it daily. 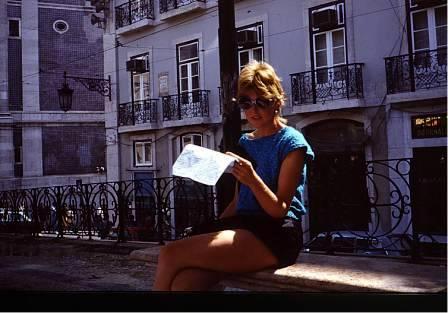 Galapagos. See here One of the Best Shots we have (  dont mind the poor quality as slides dont last very long inside a humid boat, and hanow its all digital, nice neh?) 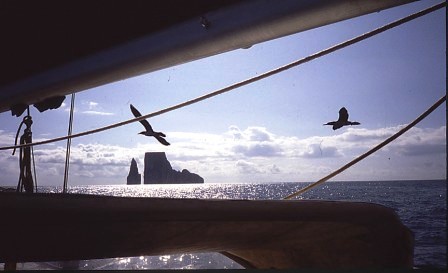 Dont know what the rules are these days, but when we were there in 1985 and due to the fact that there were not so many cruising boats it was possible for us to hang around for a while. Now the anchorage must be full by times (Thanks to all those around-the-world rallies).

Here we are in the one and  only of 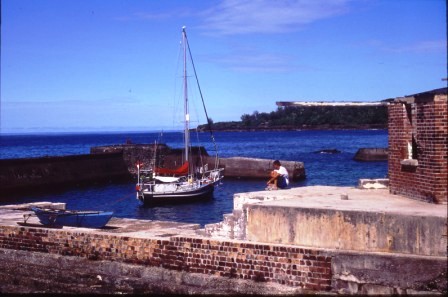 Just Jan Haring and the pond is full. At low tide we had 50 cm water under the boat.

20 meter out of the harbor its 200 meters deep, so anchoring there is a nono. We had a super time  with the people of Banaba, who see maybe 4 yachts a year.. Their local supply boat comes 3~4 times a year. And there isnt even an airport!

Jan Haring with its 10 meter loa and shallow draft made a location like this possible. Now with Alishan.would we fit?

Yes we too have grown in waterline length, as so many cruising boats. But we do love the extra space and comfort.

Crossing the Atlantic from to Thanks to the strong trade winds it was fast sailing for Jan Haring. But still, most of the times we were flying too little sail. Pfff, just wait and well get there.

Dont we all leave the ratraceworld.to get back to it as fast as possible??

We all have furling stuff, and again, do we love this toy: in-out-in-out, and of we go. Fast is good, its said somewhere  (too bad that it doesnt come cheap).

JH had an Aries Windvaneworked as the Best. Just add wind and a bit of oil 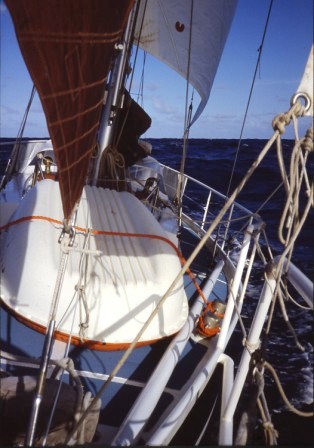 Well just some thoughts. We arent at the moment active cruising, but we live on board and are  getting Alishan and ourselves ready for a soon to come departure.

email us:  alishan_tk (at) hotmail.com